After the relations station creation and all fifteen Free Worlds representatives began enacting laws to govern interactions between each of the five governing societies, it was quickly realized that there was no means of enforcing these newly established regulations. Provisions were supplied by each Free Worlds’ government, including the best law enforcement officers available.

Monitoring Enforcement Regulations Chancellery was born, and construction of their headquarters, an autonomous, independent entity connected to the bottom of the main cylinder, began. The most gifted engineers and best and brightest from all occupied space worked tirelessly to design the ultimate capsule capable of sustaining an entire civilization of elite law enforcement officers.

It took many years for the MERC Guild and its agents to find their place within occupied space. The first few decades had volunteers from Free Worlds law enforcement agencies who had become agents to the Guild. Some early agents were much better at operating across the stars than others, and Free Worlds scientists found similarities within these agents’ genetic makeup and brain patterns. The early years taught those in charge that it took a certain type of personality to be an effective agent. It wasn’t until the genetics splicing and DNA tampering of the famous MERC mongrels that guild scientists noticed genetic makeup and cognitive thinking patterns among the very best agents. After long years of trial and error, Guild selection came with a DNA match and brain pattern markers that were only present in less than 1% of the population throughout all Free Worlds. Even less so on Kora, the homeworld of the Dolrinion Offensive.

For greater details regarding histories and details of the Guild, please refer to MERC Guild Chronicles, Catalog 3721, A written record of the Monitoring Enforcement Regulations Chancellery since its founding as cataloged by Doctor Bolanle Horn.

The general public sees current agents of the Guild as superheroes because of the difficulty of becoming an agent. Genetic selection occurs at five years of age, and academy training commences immediately for twenty years inside the cathedral. This training is one of the most heavily guarded secrets, along with mongrel breeding. An average graduating class has under one hundred agents who successfully accomplish the rigorous training.

Classes usually had two thousand recruits and graduated four hundred or less. I recalled one class only having ten graduates. New classes started and graduated every day of the year.

Mongrels are one of the greatest scientific achievements since the Free Worlds came out of their Great Darkness. They average around 1.2 meters high and weigh roughly 185 kilograms. Their sheer size, confident demeanor, and ninety unique genetic manipulating splice enhancements from other mammals, reptiles, aquatic and insects across occupied space. Mongrels are the ultimate hunters and alpha predators that can track a scent for up to sixteen kilometers. Their brains are more advanced than their distant canine cousins, which gives them objective reasoning to work in tandem with agent counterparts.

Benjamin called my attention to both sides of our vehicle, where six mongrels ran with us in their full field armor of Corin steel. We were traveling at least sixty-four kilometers per hour, and the mongrels had no trouble maintaining speed.

These magnificent beasts are in their fourth generation of splicing and training with an average life expectancy of forty-five years. All related mongrel education and breeding are conducted inside Kennel Hall by scientists and agent kennel masters.

The standard gear of mongrels comes with a Corin steel tactical backplate cover with two auto-turrets firing high-caliber explosive rounds. Their wireless neuro connection allows them to communicate with the bonded agent melded to them from across an entire planet as long as satellites are in orbit with a stable connection.

Every agent within the MERC Guild has a mongrel assigned to them. Mind melding is an extremely difficult task, and only one agent in the history of the Guild has ever successfully melded with two mongrels at the same time. Agent Dykstra has baffled cathedral scientists with her superior cognitive ability to maintain a stable connection with two beasts simultaneously. She’s submitted to numerous studies that have been unable to identify what gives her such an advantage that no other agent could ever duplicate.

“A mongrel’s bite is stronger than an alligator. I wouldn’t want those fangs anywhere near me.”

Headquarters for the Monitoring Enforcement Regulations Chancellery, the cathedral is a massive self-sustaining egg-shaped attachment at the bottom of the main cylinder on the relations station. The cathedral lacks attractive appearances like the main cylinder. All areas inside service a direct purpose to their operations. Agent facilities inside the cathedral all have a specific name that relates to one another.

Main training facility for all recruits and instructors. Academy Hall is massive, shaped into a pentagon with dozens of levels above and below with an open interior courtyard for recruit physical training. Much of what’s inside is a mystery to the general public. The facility is large enough to house twenty years of recruits. Still, it’s notable that as recruits get closer to graduation and move into new dormitories, the number of rooms needed to house them reduces dramatically.

The largest physical file storage archive within all of occupied space. Every detailed case, evidence vault, and known history for each Free World society dating back to the Great Darkness are located inside the Hall of Records. Rumors even claim that the Hall’s secret chambers have evidence of what caused the Years of Forgetting buried deep inside. Secure digital copies of all records exist, but under the Free Worlds’ Relations Policy, hard copies must be kept for backup at this location. The Hall is maintained and protected by the Librarian Order and has full power issued by magistrates inside Justice Hall to use any force necessary to protect recorded history.

The command building for MERC Agents where all five chief agents keep offices, courtrooms hearings by magistrates preside, and investigative intelligence services conduct probes. Magistrates moderate case law and determine the guilt or innocence of offenders arrested by agents. They have full authority to sentence accused and punish agents who overstep their mandates with excommunication. Magistrates are the highest law enforcement authority within the Free Worlds' Relations Policy and yield tremendous power.

All mongrels are bred and trained at this location under lock and key. Agents assigned to Kennel Hall treat their mandate very seriously in a fanatical fellowship that sets them apart from other agents. Mongrel training is intense and requires a specific personality to endure the hardships of dealing with large animals bred to kill. Guild scientists have been working on the fifth generation of mongrel for over seventy years to date without public updates on their progress. Kennel Masters hold the final say on actions within the Hall. Their dedication to creating and training the ultimate force multiplier throughout the occupied territories comes with tremendous loyalty and commitment to their work function and lifestyle.

The Armory, munitions fabrication, forge for Corin steel smelting, food production, and manufacturing for all tools and components utilized by MERC Guild agents.

Jailing facilities for criminals sentenced or accused of crimes. These facilities have never been photographed or observed by Free Worlds’ civilian populations.

A hard truth for all those chosen for MERC Guild training is that the odds of them completing the twenty-year grueling tasks are extremely difficult. Roughly 20% or less of a starting class graduates from MERC Guild training, and new classes start and end each day of a standard Civil Earth year. Training for the Guild is a guarded secret, and failed recruits aren’t allowed to retain those memories. 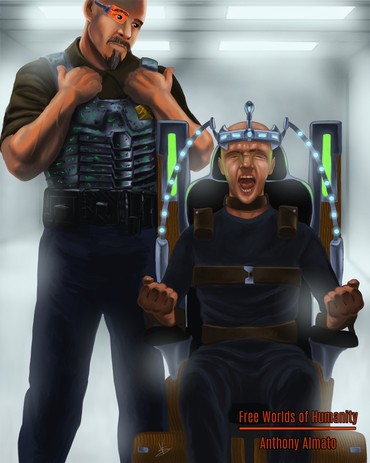 A memory wipe is conducted on failed recruits regardless of age. Numerous credits from the Capitol Forum’s budget are spent on reconditioning failed recruits' minds and bodies through rehabilitation efforts. The older a recruit is, the harder it will be to recover from a mind wipe. The memory room and its seamless white walls are used by agents every day to conduct memory erasure.

I’ve seen this process several times through the years, and it still gives me chills. One minute they’re recruits of the MERC Guild, and the next, they think they’re five years old and have no idea what’s happening.

Five chief agents headed by Chief Ashton are the highest authority within the cathedral. Chiefs take orders from the fifteen representatives inside the Capitol Forum. Senior Agents are supervisory level agents who can operate independently or work in small groups of three for recovery missions throughout occupied space. Agents are the standard ranks within the MERC Guild.

Agents are all trained in a general standard to have equal abilities in the field. However, after completing academy training, certain agents handpicked based on their performance within the academy are then put into specialized skillsets. Agents from each graduating class are placed among the various halls within the cathedral to learn a given trade, and some are enrolled into scientific and medical schools to further the needs of the MERC Guild.

Magistrates in Justice Hall are the chief interpreters of all laws issued by the Capitol Forum under the dome. While they don’t have authority to give agents mission objectives, they can suspend or excommunicate agents who violate their mandates.