Since Galma is a natural world, its unique atmospheric conditions are alien to artificial worlds that mimic Earth before the Years of Forgetting. Below 300 meters (985 feet), everything is blanketed by a constant thick fog that never parts for sunlight to touch anything below. Lowlanders have lived down there for thousands of countless years and evolved differently than others across occupied space. Free Worlds scientists believe that something within the fog has sped up their evolution and rapid changes similar to pregnancies.

The Lowlands of Galma natives are completely isolated from the influence of Highlanders and Rogue Syndicate. For the most part, Lowlanders are minimalists who live simple lives in the Lowlands because advanced technology doesn’t function properly in the fog. Fossil fuel generators are common in certain settlements for power usage of analog systems. The largest settlement, Masgem, has a modified natural gas power plant that operated on non-computerized analog systems. Yet, most settlements along pathways prefer dim candlelight for illumination because of Lowlander’s sensitivity to light. 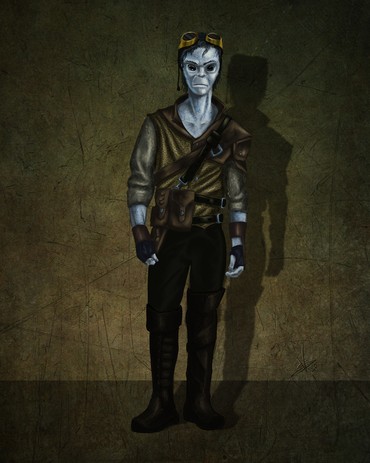 Lowlanders are the most alien-looking within occupied space because of their unique living conditions in the Lowlands. Their pupils are so massive there’s no white in their eyes, and they typically call visitors from topside, White Eyes. Their special sight in the low lighting atmosphere allows them to see using one-sixth of the. Their vision also has a much broader spectrum. Bright light can severely damage their eyes which is why all Lowlanders keep darkening goggles resting right above their eyes at all times. A bright flash would blind them where it would be a slight irritation for White Eyes.

Lowlander skin is bluish-gray and slightly translucent. Their veins are visible through their skin, and muscle tissue can be seen through the skin with enough light. Lowlanders who work or visit the Highlands need to wear protective clothing and specialized UV skin gel.

“There’s never been a discovery of advanced life other than our own. Rogue worlders might look at a Dolrinion or a Native Lowlander from Galma and think they’re aliens. Educated minds know the truth. Humanity has lived in different ecosystems for thousands of years and evolved to those conditions. Kora, the homeworld of the Dolrinions, has gravity pressure three times higher than the averages of other planets. Evolution stunted their growth and gave them greater bone density. In comparison, Lowlanders of Galma live in a constant thick fog where no sunlight can penetrate. Because of that environment, their skin is gray, nearly translucent, and their pupils are huge enough to help them see in the low-lit landscape.”

The Free Worlds Medical Corps has received reports through the years that native Lowlanders aren’t affected by DNA Degradation Disease. This terrible sickness is common across the whole of occupied space. No formal studies have ever taken place to legitimize the authenticity of these claims.

Something I found interesting that we learned was no native Lowlanders suffered the affliction common across all occupied space. DNA degradation disease was unheard of in the fog, and I could only wonder why, because it was so prevalent across Humanity. Maybe the fog had something to do with it or something else entirely.

Lowlanders have moderate personalities and prefer to keep to themselves though they will answer questions from topside visitors. The general public of settlement villages doesn’t trust anyone with white in their eyes. They also know that their largest income streams come from travelers seeking adventure, vacationing, or other reasons. Fog predators are a constant reality for Lowlanders who aren’t top of the food chain in the fog. This repetitive stress adds to their demeanor.

Masgem functions like a small city and has more visitors than native locals through most of the year. Lowlanders from this settlement grow up surrounded by Free Worlds citizens and act with personalities that match their guests with similar mannerisms and speech patterns.

Lowlander settlement elders don’t keep history books or written literature. All accounts from their long history come in the form of folktales told by authorities within settlements. These stories are handed down from generation to generation.

The uniqueness of the Lowlands, its vegetation and wildlife make for interesting ways of harvesting foods. Lowlanders keep farms of Silkworms and crickets that are used as food sources. Their overall preference is blind fish, mushrooms, and edible algae. Masgem's food sources and business dining consist of mostly imported foods to accommodate visitors.

Lowlander settlements have military services. Settlement elders act as the highest authority of enforcement, and they utilize guardians to protect locals and travelers alike.

It’s not clear if guardians go through any specific training or how they are picked to join with settlement security. Guardians protect settlements from frequent fog predator attacks by utilizing poison-tipped bamboo spears, blow darts, and bows. A select few within each Guardian group have flame throwers.

Guardian groups escort all settlement caravans that travel from settlement to settlement on pathways for protection.

At the mid-crossing, freelance guardians are common to see while descending into the Lowlands or Masgem, the largest, most populous settlement. Freelance guardians tend to dress more like White Eyes and, in some cases, utilize firearms for protection. Traveling pathways is dangerous and requires Lowlander escorts which are provided by each settlement for a price. Visitors with extra credits tend to hire additional protection and use their freelancers for important knowledge on workings within the fog.

Lowlanders don't have any space or air service branches.

Outcast groups of Lowlanders who are even more primitive than their distant cousins in settlements. Scoffs despise all White Eyes and see their visitations to the Lowlands as poisonous to the purity of the Lowlands. They’re more aggressive than settlement natives. Scoffs sharpen their teeth and have tattooed faces making them look like monsters. Rumors across the Free Worlds that claim Lowlanders are native cannibals originally come from this population segment who make their homes in the deep wilds within the fog.

The White Eyes need to go so we can live the way we did for thousands of years before the Syndicate came. You’ll let us take a few. We’re hungry.